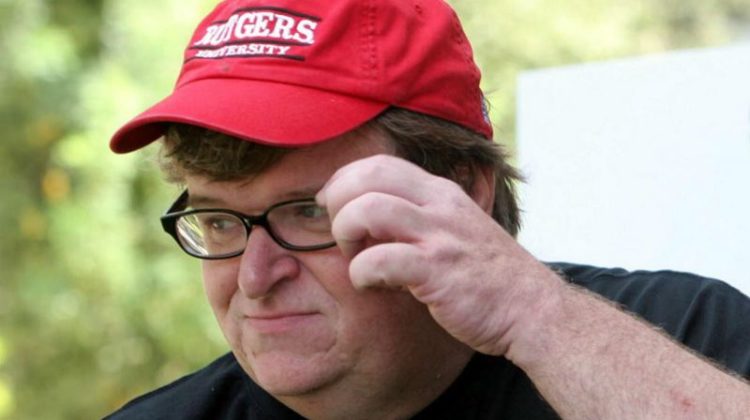 The documentary film-maker Michael Moore says Donald Trump is building up the same amount of momentum in key battleground states that saw him win the White House in .

The veteran political campaigner, who was one of the few who predicted Trump would beat Hilary Clinton to the presidency last time round, has said history appears to be repeating itself.

It comes after the Republican convention this week in which the President clawed back some of the momentum built up by Democrat nominee Joe Biden in recent weeks.

Accepting the Republican nomination on the White House lawn, Trump positioned himself as the leader who can save America from violence and looting, while calling his opponent a ‘puppet of the left.’

Pointing out that CNN polls are showing a ‘virtual tie’ in Minnesota and a collapse in Biden’s lead in Michigan, Mr Moore said on that he was ‘sorry to have to provide the reality check again.’

Urging his fans to campaign against Trump’s re-election bid, he added: ‘Are you ready for a Trump victory? Are you mentally prepared to be outsmarted by Trump again? Do you find comfort in your certainty that there is no way Trump can win? Are you content with the trust you’ve placed in the DNC to pull this off?’

The vast majority of commentators predicted a win for Clinton at the last election after she comfortably led in the polls for much of the campaign.

Biden has been further ahead at times but Moore fears Democrat supporters are getting complacent again.

He wrote: ‘The Biden campaign just announced he’ll be visiting a number of states— but not Michigan. Sound familiar? I’m warning you almost weeks in advance. The enthusiasm level for the million in Trump’s base is OFF THE CHARTS!

A national CNN poll this month showed that Biden’s lead over Trump has narrowed.

Trump spoke at a campaign event in New Hampshire on Friday night in which he said he wants his daughter Ivanka to become the first female President of the United States.