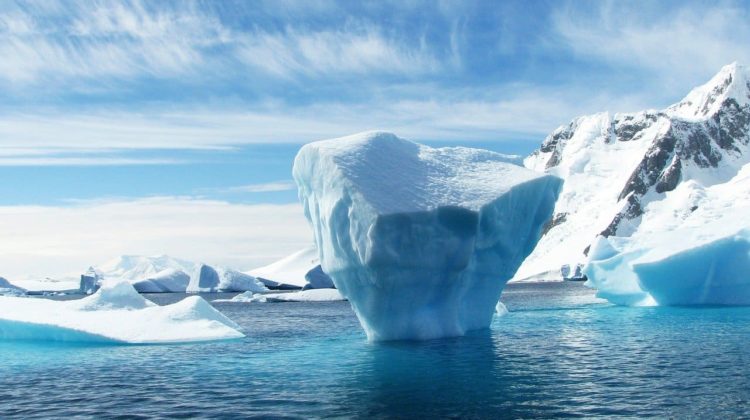 The world’s southernmost weather station has seen record-high temperatures over the past three decades.
The record heat was driven largely by natural swings in Antarctica’s climate, but appears very likely that it worked in tandem with human-caused warming.
The Amundsen-Scott station, located at Antarctica’s south pole, recorded warming that was three times higher than the global average from 1989 to 2018, according to the research.

However, this rate of warming was not consistent across Antarctica. The results find the rate of warming at the south pole was seven times higher than across the continent as a whole.

The record heat was driven largely by natural swings in Antarctica’s climate, the study lead author tells Carbon Brief, but it “appears very likely that it worked in tandem with human-caused warming”.

Antarctica holds enough ice that, if all melted, would raise global sea levels by around 60m.

The rate at which Antarctic ice loss has contributed to sea level rise has accelerated in recent years. Most of the ice loss is occurring in West Antarctica, where many land glaciers are coming into direct contact with warm ocean waters.

The new study, published in Nature Climate Change, looks at changes to air temperatures at the Amundsen-Scott station, a US scientific research station at the south pole, the world’s most southerly point.

Temperatures here generally stay well below freezing. Annual temperatures average around -49C, with the coldest temperature ever recorded being -82.8C.

However, the analysis shows that, over the past 30 years, temperatures at the south pole have been rapidly rising, explains study lead author Dr Kyle Clem, a polar researcher at the Victoria University of Wellington in New Zealand. He tells Carbon Brief:

“Research over the past couple decades revealed the Antarctic plateau, the coldest and one of the most remote places on Earth, had been cooling while global temperatures were increasing…Our study has found that this is no longer the case. The south pole is now one of the fastest warming regions on the planet, warming at an incredible three times faster than the global average rate.”

The bottom chart shows that the most recent 30-year period of 1989-2018 warmed at a record rate of 0.61C per decade, which is over three times the global average rate.

For the study, the authors investigated the likely drivers of the increased warming at the south pole over the past three decades.

They find the “dominant” driving factor is likely to be natural swings in Antarctica’s climate, explains Clem.

Specifically, the researchers find that, over the past few decades, ocean temperatures in the western tropical Pacific Ocean have been unusually warm. (This is linked to a natural climate fluctuation known as the Interdecadal Pacific Oscillation.)

This, in turn, has caused stronger storms in the Weddell Sea, a part of the Southern Ocean surrounding the Antarctic Peninsula. This enhanced storminess has caused an increase in the transportation of warm moist air inwards towards the South Pole, Clem explains.

Human-caused climate change also likely played a role, but it is still not clear to what extent, says Clem:

“Our results suggest global climate change very likely played a role, but it was not the dominant driver.”

To try to understand the role of climate change, the researchers used climate models. They investigated temperature rise under different scenarios, including one without any human-caused greenhouse gas emissions.

They found that the warming seen in the south pole in the past few decades would have been possible in a world without greenhouse gas emissions – but only just, says Clem:

“The observed south-pole warming during the past 30 years exceeded 99.9% of all possible 30-year temperature trends at the south pole simulated in climate models without increased greenhouse gases included. Therefore, while natural changes chiefly caused the recent south pole warming, it appears very likely that it worked in tandem with human-caused warming.”

The research shows that understanding warming at Antarctica’s south pole is a complex issue, says Dr Ella Gilbert, a climate scientist at the British Antarctic Survey, who was not involved in the study. She tells Carbon Brief:

“This is a really interesting study because it shows how complex the causes of warming trends in Antarctica are. It’s clear from these results that remote linkages extending far beyond the Antarctic…contribute in a major way to regional climate over the south pole by influencing the amount of heat that can travel inland.”

“The warming trend at the south pole is much larger than at other stations, but this study shows that it’s only larger because natural factors are amplifying the underlying climate change signal.”

It is important to note that, away from the south pole, human-caused warming is causing significant ice melt, says Prof Andrew Shepherd, director of the NERC Centre for Polar Observation and Modelling and scientist at the University of Leeds. He tells Carbon Brief:

“Climate change has caused significant ice loss from Antarctica, even if its fingerprint in the frozen interior of the continent is difficult to detect.”