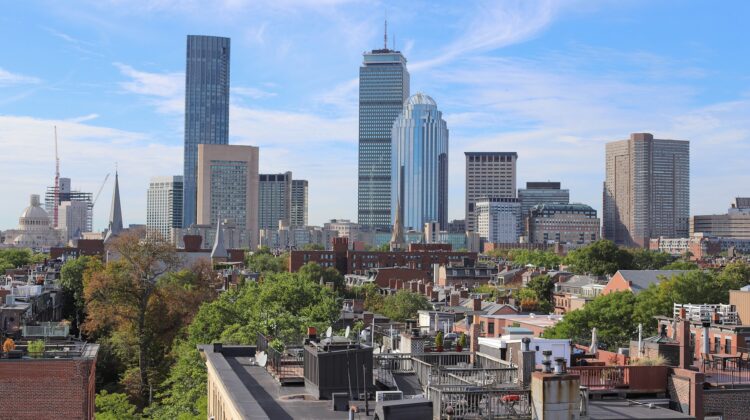 The city prioritizes equity and inclusion as it incorporates tree coverage into climate resiliency efforts.

Mattapan, a neighborhood in southwestern Boston, is heating up. Although some areas of the residential neighborhood benefit from the cooling effects of nearby green spaces, others are vulnerable to increasing heat stress, largely because of dark roofs, unshaded parking lots and pavements, and wide streets with limited numbers of trees.

Mattapan is one of five Boston neighborhoods identified as being at particular risk for heat stress. (The other neighborhoods are Chinatown, Dorchester, East Boston, and Roxbury.) The five neighborhoods, all environmental justice (https://s3.us-east-1.amazonaws.com/download.massgis.digital.mass.gov/shapefiles/census2020/Boston_metro_EJ_2020_map.pdf) communities, are at the focus of Boston’s heat resilience strategies, which include increasing the amount of light-colored surfaces and shade.

A big reason for the risk is the simple fact that there are fewer trees in these neighborhoods. For example, less than 25% of the land in East Boston (excluding Boston Logan International Airport) has adequate tree coverage.

Boston has recognized the importance of healthy tree coverage in addressing heat resilience and other climate change mitigation strategies. In fact, the city has been developing its first urban forest plan—a pathway to maintaining existing trees, planting new ones, and otherwise helping the city deal with the effects of a changing climate. The plan is set to be published in late summer or early fall.

“This plan essentially provides an analysis of the conditions in each neighborhood,” said Neenah Estrella-Luna, an associate professor at Northeastern University, a social equity researcher, and a consultant on the plan.

The plan’s “neighborhood strategies” approach considers the unique ways in which each neighborhood has the ability to address particular issues and identifies the people within that neighborhood who would be able to do something about them. The approach would employ the help of urban forest nonprofits like Dorchester-based Speak for the Trees, whose focus is on increasing the size and health of Boston’s urban forest, particularly in undercanopied areas. In addition, the plan could call upon the help of Lower Roxbury–based Friends of Melnea Cass Boulevard, which stopped a $25.6 million construction project that would have removed 124 mature trees, the Boston Globe reported.

This approach was driven entirely by the urban forest plan’s equity council—a part of the larger community advisory board—and composed of individuals from historically excluded and currently marginalized communities across the city. The plan’s consultant team organized a series of focus groups, which sent out a series of surveys to the equity council to establish overarching goals, the best strategic approach, protection regulations, expectations for the level of involvement from stakeholders, and more.

Responses were summarized and consolidated and went through three rounds of refinement, a process that allowed the equity cabinet to participate on its own schedule and its members to interact with one another. “That technique pushed for consensus building, as opposed to just whoever talks the most or the loudest, which often is how decisions get made,” said Amy Whitesides, director of resilience and research at Stoss Landscape Urbanism and a consultant on the urban forest plan.

The neighborhood strategies approach also helped inform the plan’s four goals: equity, community-driven processes, making sure trees are valued and prioritized, and proactive care and preservation of existing trees. The last tenet was especially important, Estrella-Luna explained. Before the drafting of the plan, “there just weren’t sufficient resources devoted to particularly proactive protection of the existing canopy in historically excluded neighborhoods.”

In early spring of this year, the city halted renovation plans for Malcolm X Park, located in Dorchester, after outcry from residents. The plan threatened to remove 54 trees, many of which are more than a century old.

Hunter Jones, manager of the Climate and Health Project within NOAA’s Climate Program Office, noted that Boston’s neighborhood strategies approach is part of a larger trend in the United States. Jones identified air temperature, humidity, and even wind speed as factors contributing to urban heat and air quality issues across the country. “But increasingly,” he said, “there’s interest in looking at intracity differences.”

Credits: This article by Iris Crawford, https://eos.org/, is published here as part of the global journalism collaboration Covering Climate Now.