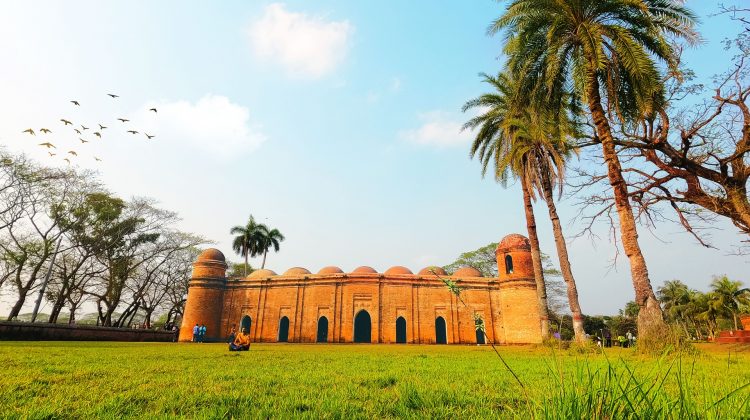 
There must be something wrong with the saltwater,” ‍says Mohammad Helal Uddin, the khatib of the Sixty Dome Mosque, part of the Mosque City of Bagerhat, a Unesco world heritage site on Bangladesh’s southwestern coast. “I have been noticing for six or seven years now that the walls of the mosque are getting damp, containing a green colour.”

Helal Uddin, who delivers the sermon every Friday and has been in charge of the building for 30 years, is very concerned about changes happening to what is commonly known as Shait Gambuj Mosque. “The electric lamp is kept on all night to avoid the feeling of damp,” he says.

The Sixty Dome Mosque is the largest mosque in Bangladesh from the Sultanate period (1204-1576). It was built by Khan Jahan Ali, then governor of the Sundarbans, the area famous for its mangrove forests, between 1442 and 1459.

There are 127 archaeological sites in the country’s 19 coastal districts, and at least 50 along the southwestern coast have been damaged by climate change, says Afroza Khan, regional Khulna director for government agency the Department of Archaeology.

This part of Bangladesh is particularly vulnerable to the impacts of climate change, especially salinisation, according to the World Meteorological Organisation and the Intergovernmental Panel on Climate Change (IPCC).

According to the Bangladesh Soil Resource Development Institute, in 1973, 833,000 hectares of coastal land were saline. In 2009, this stood at just over a million hectares. This increase in the concentration of salt in the soil and water has been exacerbated by large cyclones hitting the country frequently since 2005.

“I think salty air with saltwater is responsible for this. I can see this change very clearly,” says Helal Uddin of the Sixty Dome Mosque.

Large amounts of land in coastal districts, including Bagerhat, have become unsuitable for cultivation and the supply of drinking water is under threat. But increased salinity has also damaged and destroyed various habitations and structures.

Clay bricks and brick chips used as aggregate in concrete are porous, and can be affected by both moisture that penetrates bricks and the salt dissolved in the moisture. When the water evaporates, the salt that is left behind, often appearing as white deposits on walls, can damage the structural integrity of the building.

“For the last five or six years, we have been hearing about the effects of salinity on the homes of coastal residents,” Mohammad Arifuzzaman, a senior research engineer at the government-run Housing and Building Research Institute (HBRI), tells the Third Pole. “In fact, the results of salinity are fairly certain. We are studying how to prevent it and what the consequences will be.”

Salinity has also affected archaeological sites, including the Sixty Dome Mosque, which is a clay-brick building, says Khandoker Mahfuz ud Darain, a professor in the Department of Architecture at Khulna University who is conducting research on the effects of climate change on coastal archaeological sites in Bangladesh.

“Except for the north side of the Sixty Dome Mosque, the other three sides were renovated with specially made bricks a decade ago. Salt has been observed in these reformed places. The new bricks have a higher salt rate than the old ones on the north side,” Darain says.

Khan says the newly laid bricks may not have been made to be as salt-tolerant. Salt has not just been forming on the walls, but also on the tops of the domes. This rate of salinisation is occurring in other sites in the Mosque City, Matabbar has noticed. “In this vicinity, the Nine Dome Mosque, Bibi Begni Mosque, Ranbijoypur Mosque and Chunakhola Mosque are all in the same condition. The biggest problems are in the Sixty Dome and Chunakhola mosques,” he says.

Darain has noticed two other trends that he says are the inevitable results of climate change. One is that the general rise in temperature has increased the number of cracks in buildings on archaeological sites. As summer temperatures rise every year, cracks become more common.

Because of high rainfall in this region, water is leaking through these cracks. “How the salinity of the soil can go so high is subject to research. However, excessive rainfall and heat seem to be the causes of cracks,” says Khan.


Proposals and initiatives, but no action yet

In 2019, the International Council on Monuments and Sites (ICOMOS), Google Arts & Culture, and CyArk, a US-based organisation that creates digital representations of heritage sites, conducted a workshop with the Department of Archaeology. This produced five recommendations regarding the impact of climate change on coastal archaeological sites in Bangladesh.

The first of these was an emphasis on taking climate change into account when preserving archaeological sites, especially world heritage sites.

“We are taking some initiatives. The law has been amended. Work will commence in the next financial year after identifying the important at-risk places in the coastal region,” says Ratan Chandra Pandit, director-general of the Department of Archaeology.

Archaeologists think that the method of maintaining historic buildings in coastal areas needs to be changed, but the money needed to preserve archaeological sites in a climate-friendly manner has not been allocated. As a result, there is no special arrangement in place for the protection of at-risk buildings.

Bangladesh is taking part in global initiatives to protect archaeological sites from climate change, but people like Helal Uddin think these initiatives should be implemented sooner rather than later.

“These mosques are not just ours, they are the wealth of the world. The government and the world community must pay attention,” he says.

Credits: This article was originally published on The Third Pole (link: https://thethirdpole.net/en/) under the Creative Commons BY NC ND licence (link:https://creativecommons.org/licenses/by-nc-nd/4.0/).