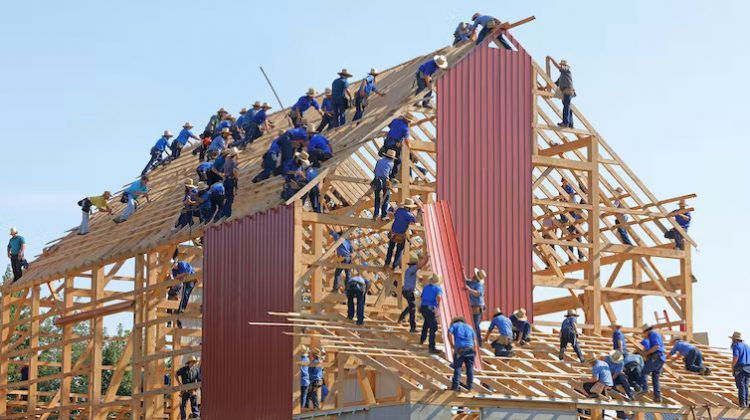 Will it stand up? Randy Fath/Unsplash, CC BY-SA

The four-day working week continues to gain momentum, with pilots taking place in the UK, Ireland, US, Canada and Australia. Over six-month periods between February and November, employees at participating businesses are working only 80% of their time but still receiving 100% of their salary and benefits.

These schemes, which are being driven by non-profit coalition 4 Day Week Global, are supposed to “benefit everyone” by raising workers’ productivity, improving work-life balance and happiness levels, and reducing unemployment.

But is this too good to be true? While many firms may find it a better arrangement than a five-day working week, there are several reasons why the concept needs further research and debate before we talk seriously about rolling it out.

A four-day week is unlikely to enhance productivity unless it’s already low. Countries like Ireland and the UK already boast very high worker productivity, measured as GDP per hour worked.

Indeed, Ireland’s productivity is amongst the highest in the world, hitting a whopping US$125 (£103) per hour in 2019 (admittedly somewhat distorted by the presence of over 1,500 multinationals). And while there has been much discussion about UK productivity struggling to keep pace with other major economies, it is still very high in overall terms at US$54 per hour. China and India’s equivalent figures are respectively US$11 and US$8.

To even maintain these productivity levels while working four days a week, employees would need to increase output per hour significantly. This is simply because total GDP will fall if everyone works 20% less. In 1988 Japan shortened the workweek from 46 to 30 hours. Productivity did not increase enough to compensate, and economic output between 1988 and 1996 was 20% lower than it otherwise would have been.

Countries like Ireland or the UK may require draconian work-floor practices to squeeze enough productivity out of a four-day week, including requiring employees to work more daily hours than before. This would increase the chances of excessive stress, industrial accidents and so on.


2. The truth about happiness

Claims that we would all be happier working four days overlook the theory of the hedonic treadmill, which argues that permanent extra happiness is a mirage. People may feel happier over, say, a six-month period. But over a longer duration, they would arguably revert to their previous level of happiness. In 2000, France reduced the working week from 39 hours to 35 hours among large firms. An assessment later concluded that it had failed to improve workers’ happiness.

The hedonic treadmill explains why many retirees go back to work or why lottery winners continue in their jobs. Or why, in the case of France, many workers got second jobs or moved to smaller firms. It is also why, at the very least, we would need to pilot the four-day workweek over longer periods than six months.

Furthermore, there is little evidence of crises in work-life balance or job unhappiness in Ireland or the UK. According to a 2018 Eurostat survey, 38% of Irish people rated their job satisfaction as “high” – sixth highest in the EU after Norway, Denmark, Iceland, Austria and Switzerland. UK job satisfaction was 29%, still above the average. And according to the 2021 UK census: “Overall, personal wellbeing levels have increased in the UK.”

A four-day working week may worsen inequities at work. Ireland and the UK already suffer from “hollowed-out” and polarised labour markets, which is to say that the proportion of middle-ranking jobs to lower-ranking jobs has been falling over decades.

The four-day week would lead to a variation of this issue. People already working four days a week – at four-day wages – would find themselves doing the same work for a smaller salary than those whose working days had just reduced.

Also, older workers would be potentially disadvantaged by the need to do more in a shorter period of time. This is what happened in the US when the average working week was reduced during the great depression from about 48 hours to 41. This should be of concern in Ireland and the UK with their ageing populations.

There is a strong association between reduced working hours and increased part-time employment. This is because companies whose full-time workers reduce their hours have to hire part-timers to ensure output does not drop, especially in the service sector.

Part-time jobs are, however, associated with “low pay and temporary contracts”. A surge in part-time employment would therefore lead to reduced earnings overall.

It would also increase job insecurity and may worsen productivity. Though the evidence around productivity is fairly limited here, it is unlikely to rise given that firms invest less in their part-time workers. This is partly because these workers increase firms’ management and transaction costs.

One supposed benefit of shortening the working week is reduced unemployment. This was why working weeks were reduced in the US in the 1930s – which was reasonable, given that unemployment was 25% in 1933.

Today, unemployment in the UK is 3.7%, the lowest in more than 20 years. In Ireland it is 4.7%, while long-term unemployment is a negligible 1.2%. As the Irish Times recently said: “There are loads of job vacancies in Ireland, but where are the workers?”

When labour markets are so tight, it would be strange to reduce the labour supply by cutting everyone’s working hours (unless, of course, workers managed to be as productive as over five days). Such a reduction would exacerbate labour shortages. It would also squeeze public finances – for example health services would require more staff, thus raising the wage bill.

A four-day week would also put extra demand on leisure services. Imagine wanting to spend your extra time travelling for a long weekend away, only to end up in long queues at Heathrow or Dublin airports. Oh wait, this is happening already.

There are other less risky ways to improve working conditions that may be more effective. These include flexible retirement schemes and more official vacation days and bank holidays. Or if governments provided better support for innovative entrepreneurs, it could stimulate productivity growth, job satisfaction and de-carbonisation in one sweep.