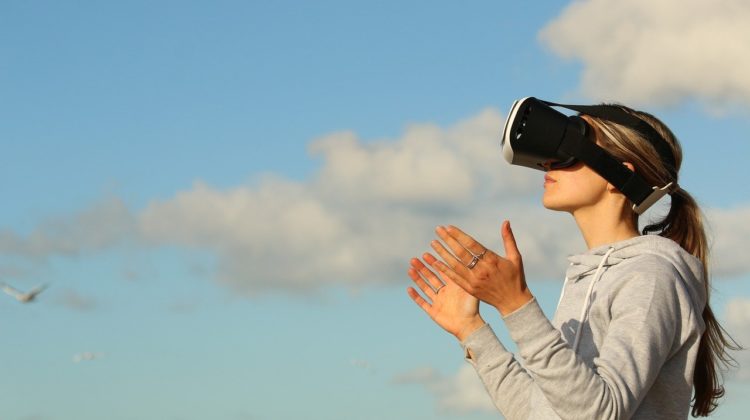 A major augmented reality artwork debuted July 4 at sites in six U.S. cities, including the Art Museum steps in Philly, according to its organizers. Viewers who download an app and take their phones to the Benjamin Franklin Parkway will be able to watch artist Nancy Baker Cahill’s work Liberty Bell appear, Pokémon Go-style, hovering in the air above the museum.

The augmented reality work shows an animated bell shape made of red, white, and blue ribbons of color. It swings and rings — eventually deconstructing then reconstructing in what the artwork’s local sponsors describe as “an uncomfortable, but cohesive moment.” It’s about a minute and a half long.

Liberty Bell is intended to raise questions of what freedom means right now — and for whom — as the country endures a pandemic and citizens demand racial justice, Baker Cahill says.

“From its origins in American history, ‘liberty’ was only available to a certain demographic and came at great expense to others,” she said in a statement accompanying the work’s release. “You can’t have a conversation about freedom and not talk about the history of slavery and inequality in the United States. … That’s the conversation we need to have.”

Fifteen months in the making, Baker Cahill’s project, which is viewed while outside, appears particularly well-suited to this time.

“I don’t want to say it’s a lucky moment, but I feel grateful that this medium is accessible in large public spaces and allows for social distancing,” she said in an interview Saturday. “The other beautiful thing about this medium is it does no environmental damage. So in my opinion it’s one of the more perfect public art forms.”

Every Thursday, we’ll send you ways to help you live better and stay connected while we’re social distancing.

In addition to Philadelphia, Liberty Bell is also scheduled to debut at sites in Boston, Washington, Charleston, S.C., Selma, Ala., and Rockaway, N.Y. The work was commissioned by the Art Production Fund, and presented in partnership with 7G Foundation and Jamaica Bay-Rockaway Parks Conservancy. It is sponsored in Philadelphia by the Association for Public Art.

“At this profound historic moment when centuries of racial injustice have come to a head, we are moved and inspired by the artist’s expression of the bell as both ‘a warning and a celebration,’ ” said Penny Balkin Bach, APA executive director, in the statement. “It’s not a 4th of July spectacle; it’s a meditative reflection of what many are feeling right now.”

Originally, Baker Cahill had her eye only on Philadelphia, a city where she said she spent a lot of time as a child, thanks to grandparents who lived in Delaware and other family in the city. Then, at the urging of partners, she got more ambitious.

Why the Art Museum steps in Philly? Why not, say, the area around Independence Hall?

“It felt redundant to put it right over Independence Hall. You already have your Liberty Bell,” she said. The Art Museum steps offered “this large, public open space that’s sort of iconic in its own right and … it felt like it would just be able to kind of occupy that space and engage a larger audience there.”

Plus, “so many public protests have been there that it has this whole history. It itself is kind of a loaded site. It felt appropriate,” Baker Cahill said. “I also know that when you stand at the top of the steps, anyway, you kind of have this broad view of the city and that felt like a great opportunity as well.”

The Los Angeles-based artist didn’t herself get the opportunity to scope out the site, however.

“I was supposed to. But, no, COVID obliterated that. Now, we still intend to do really rigorous and robust community programming” in connection with the project, “but we’re obviously going to have to do most of it through Zoom,” she said.

Liberty Bell will be up for about a year, Baker Cahill said. It originally was going to be a shorter period, but “we want to give everyone a chance to engage with it,” while staying safe.

Full instructions for seeing and hearing the artwork are on the Art Production Fund website, artproductionfund.org. You’ll need to download Baker Cahill’s 4th Wall app from the App Store or Google Play, using WiFi. The app works on iPhones 6s and above (iOS11 and up), any iPad AR capability, and Androids with AR Core.

Viewers should “Allow Access” to photos, microphone, camera, and location, and be sure the device’s sound is on. Organizers say the 4th Wall app does not collect any user data.

The best vantage points will be from the bottom of the steps and from the Oval Park across the street, APA says.